CI/CD workflows smooth and simplify the development process. In this guide, learn how to setup a format that works well for an individual or a team of Serverless devs.

These are the things we want from our CI/CD Workflow:

We'll dive into all the details of the entire workflow end to end, but before we do, let's have a look at a high level how we will address the requirements listed above.

To illustrate the four steps of the CI/CD workflow and the related concepts, we'll use the workshop full-stack application as an example. The workshop app is open source and available on Github at https://github.com/skierkowski/workshop.
‍
This workshop application has four different microservices; however, we'll focus only on the three backend API services, fullstack-database, fullstack-tasks and fullstack-restapi services which can be found in the /backend-database, /backend-tasks, and /backend-restapi subdirectories respectively. Each of these directories contains a serverless. yml.

The workflow is split into four steps of the deployment lifecycle. To describe this workflow we will use thefullstack-restapi services from the workshop fullstack app as an example.
In order to meet the requirements we've laid out for our team, this is the workflow we'll design to meet those requirements:

While a developer is working locally in their terminal and IDE, they will use local emulators when feasible. However, they should be encouraged to deploy to real cloud services often to get a more realistic view of their service.
‍
Developers will deploy their application frequently to test out using real-world resources. They will do this before committing their code or making a pull request. They'll likely run integration tests on the deployed services before committing the code.

Once the developer is happy with their code they will commit it and open a pull request in Github. As a part of the review process, it is helpful for other developers to see the test results and get a live preview of the new feature. Therefore we'll setup Serverless CI/CD to automatically test and deploy pull requests.

Organizing your repo, apps and services

In a growing serverless team it can be difficult to figure out how your applications, services and repositories should be organized for collaboration and growth.

Here are a few guidelines you can follow to help organize your repos, apps and services. These are just rules-of-thumb, so you will need to evaluate your organization and consider the trade-offs. If needed, Serverless, Inc. provides architectural reviews, and we also have trusted partners who can help too.

Before we define and automate our workflow, we must first create all of our deployment environments and setup the corresponding service accounts for eachenvironment. As per our requirements, we want to isolate our staging and production environments from each other and from other environments.

For each environment we'll create a separate AWS Account so we can manage access to each independently and isolate the services from one another. Consultthe AWS Multiple Account Billing Strategy guide for more considerations in choosing the right environment isolation strategy for your organization.

We'll also likely use other 3rd party APIs, like Stripe for payments. In which case, we’ll want to make sure that we manage each of those accounts independently foreach environment.

We will create one AWS account for each environment, so the AWS accounts will be development, staging, and prod. Each AWS Account requires billing information which can be cumbersome to manage. To make this a little easier AWS provides managed accounts in organizations so you can have multiple accounts in a single organization with a single payment account and bill.

Follow these steps provided by AWS for creating the three AWS Accounts for each environment.

Create other service accounts per environment

While AWS provides a broad range of services, it is also likely that your service depends on other third party services like Stripe for payments, SendGrid for emaildelivery, Sentry for exception tracking and much more.

Just the same way we isolate each of our deployment environments between development, staging and production, we should also isolate our dependencies foreach environment. For each of these third party services you should setup separate accounts or isolated environments, and generate independent set ofredentials (e.g. API Keys) for each.

Use deployment profiles to manage environments 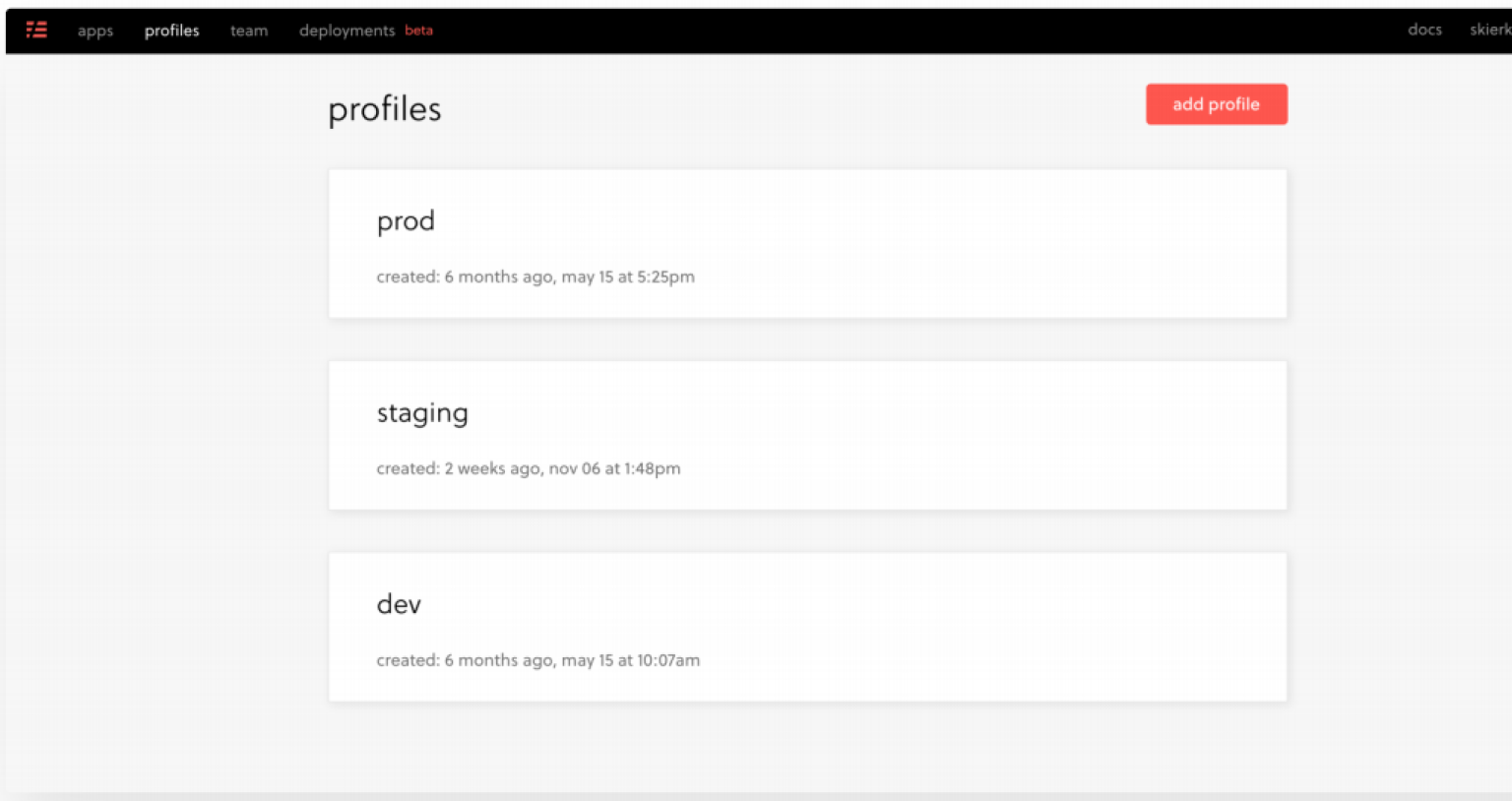 With AWS Access Roles the AWS Access Keys are generated by Serverless Framework on every command and the credentials expire after one hour. This enablesyou to deploy from the CLI without having to manage the AWS credentials and it enables Serverless CI/CD to deploy to your AWS account.

The parameters documentation provides instructions for associating key/value pairs with a deployment profile. For each third party account generate thecredentials and save them in Parameters. If you are familiar with AWS SSM, this is a very similar process; however. Serverless parameters make it much easier tomanage and access those parameters.

In our workshop example we've defined two parameters, endpoint and endpoint_api_key, the former is a URL and the latter is an API Key which we shouldconsider to be sensitive. In a real-world case, you would have parameters to store parameters for your dependent services, like a API keys, endpoint addresses,database URIs, etc.

When the service is deployed those parameters are resolved to the values from the deployment profile corresponding to the stage. For example, when you deployto staging the${param:endpoint_api_key} will resolve to 54325-staging and when you deploy to production it'll resolve to 23569-prod.

In each of the three deployment profiles, add a parameter named env and give it the corresponding names dev, staging, and prod. We will use this later whenaccessing outputs across different stages.

Now that we have the deployment profiles configured, we need to configure the applications and stages to use those profiles.

Go to the settings tab in your application details view and add three stages, dev, staging, and prod. In each, set the profile to the corresponding name, e.g. dev =>profile-dev. Adding this mapping will automatically load the AWS Access Role, Parameters and Safeguards from the deployment profile when you deploy. 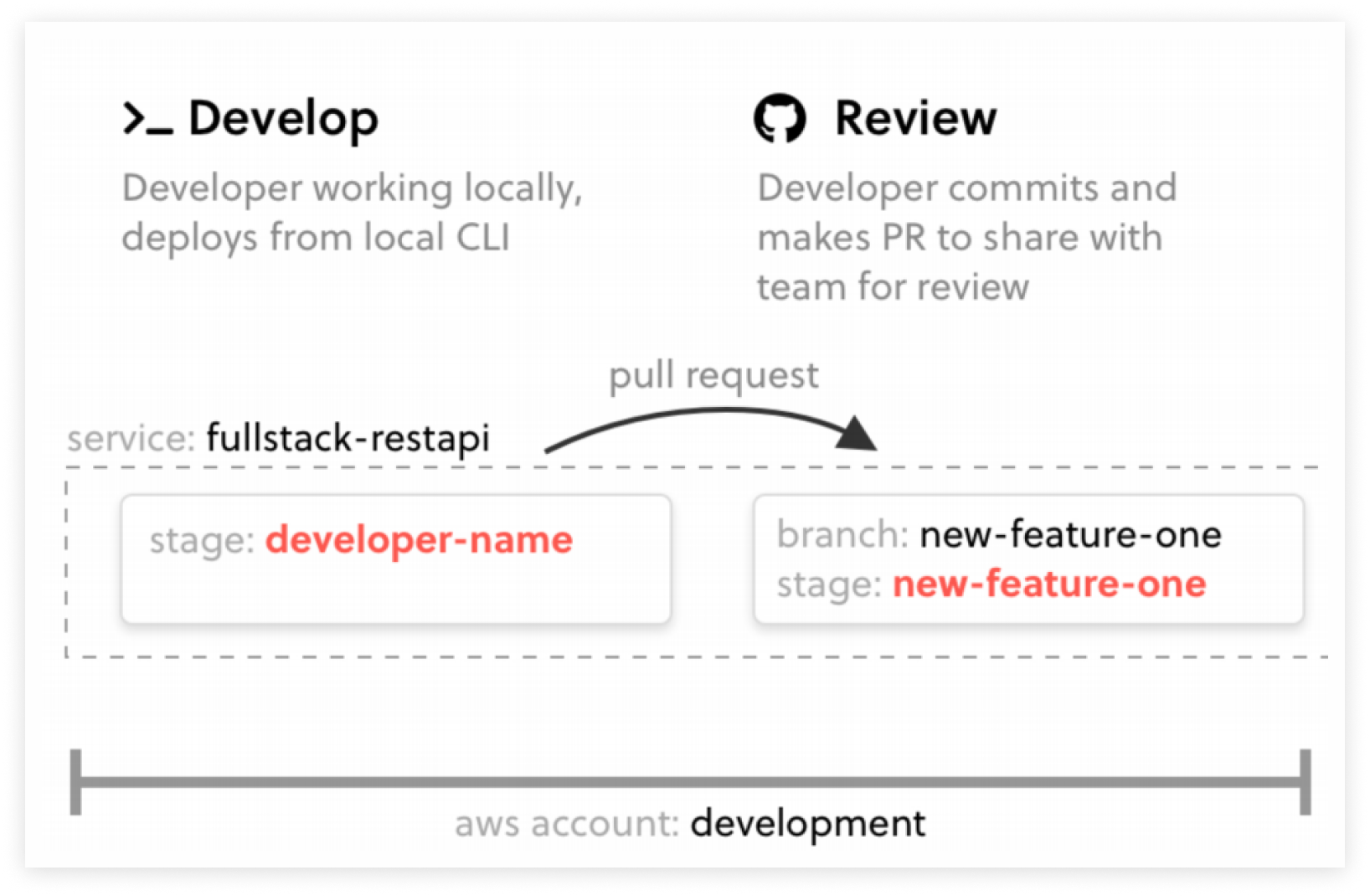 When fullstack-restapi is deployed, it identifies the values from fullstack-database, and sets them at deployment time. Upon deployment, you'll see these in theservice instance view in the dashboard.

Now that fullstack-database is deployed, the outputs are published to the dashboard, and made available to all other services. In fullstack-restapi we can nowuse the ${output) variable to get the values of those outputs from fullstack-database and set them as environment variables on our lambda functions.

Once both services are deployed, this is how the values of the outputs are passed within the serverless. yml and across services. 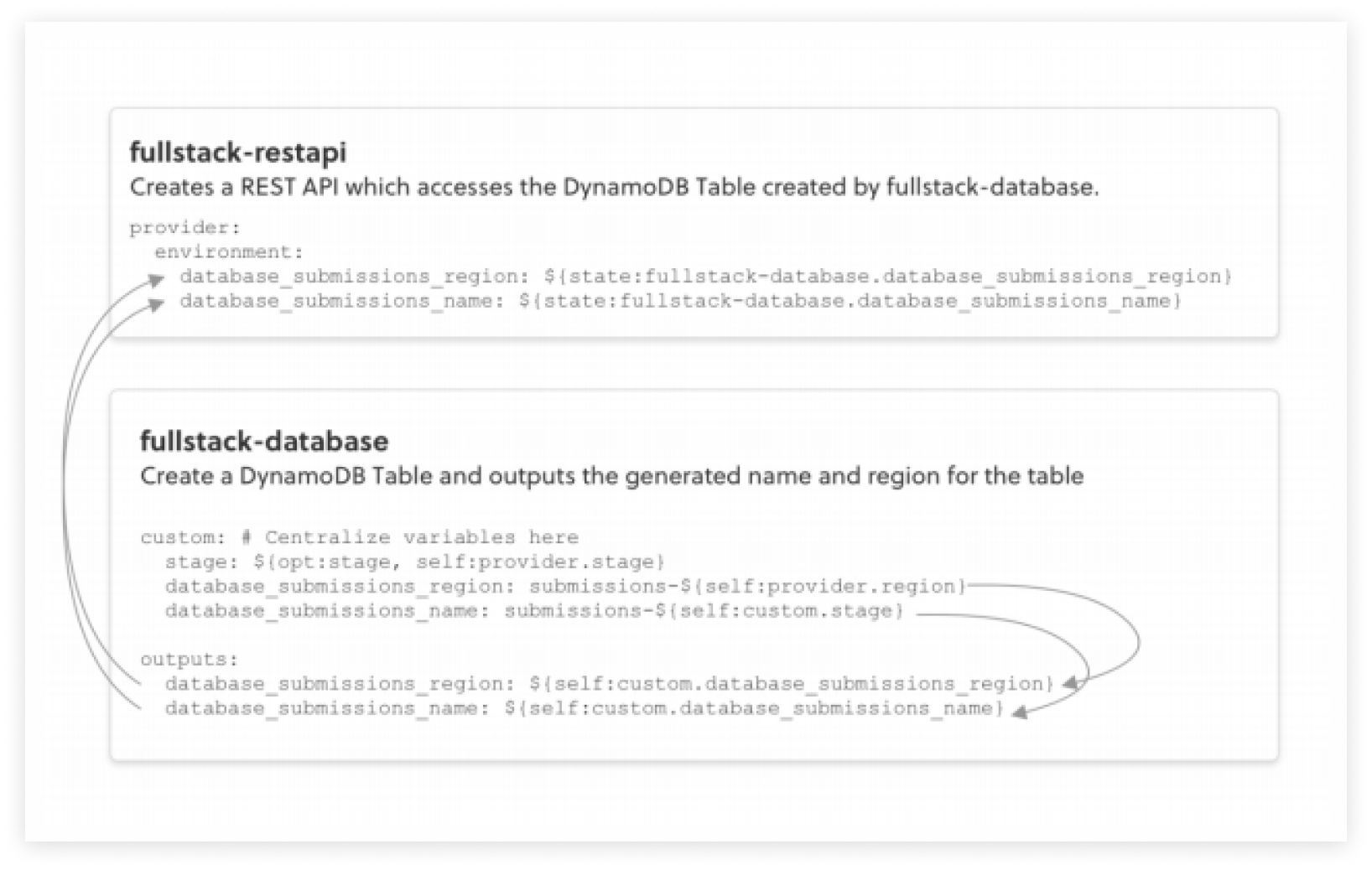 Consuming outputs in fullstack-restapi across stages

By default, when the ${output} variable is used, it gets the value from the dependent service in the same app, stage, and region as the current service. In our stageand prod environments this will work as-is; however, this default behavior will not work if the stages do not match.

Luckily, there is a nice solution. Earlier we defined a parameter called env in our three different deployment profiles. This means we can use the ${param：env} variable to get the values dev, stage, and prod for each respective deployment profile

This is the original default syntax we use to reference the output database_submissions_name from fullstack-database.

We'll replace it the extended syntax which allows us to reference outputs from different applications, stages, and regions.

We will now use our ${param:env}, which we previously defined in our deployment profiles, to replace the value of the stage in the ${output) variable.

Development: deploying from the CLI

As each developer works on a new feature locally, they should be encouraged to deploy their work frequently so they can test it with real cloud resources before making a commit. Once everything checks out, they can commit and make the pull request.
‍
When deploying during development, we want to make sure that one developer doesn't overwrite the changes of another developer and their services should have access to other shared services.

The second step on our workflow is to create a pull request of our feature branch against the master branch. We want to automatically run the unit tests anddeploy a preview of this service.

For each service in your application, go to the CI/CD Settings tab, and add this configuration to the Preview Deployments section. 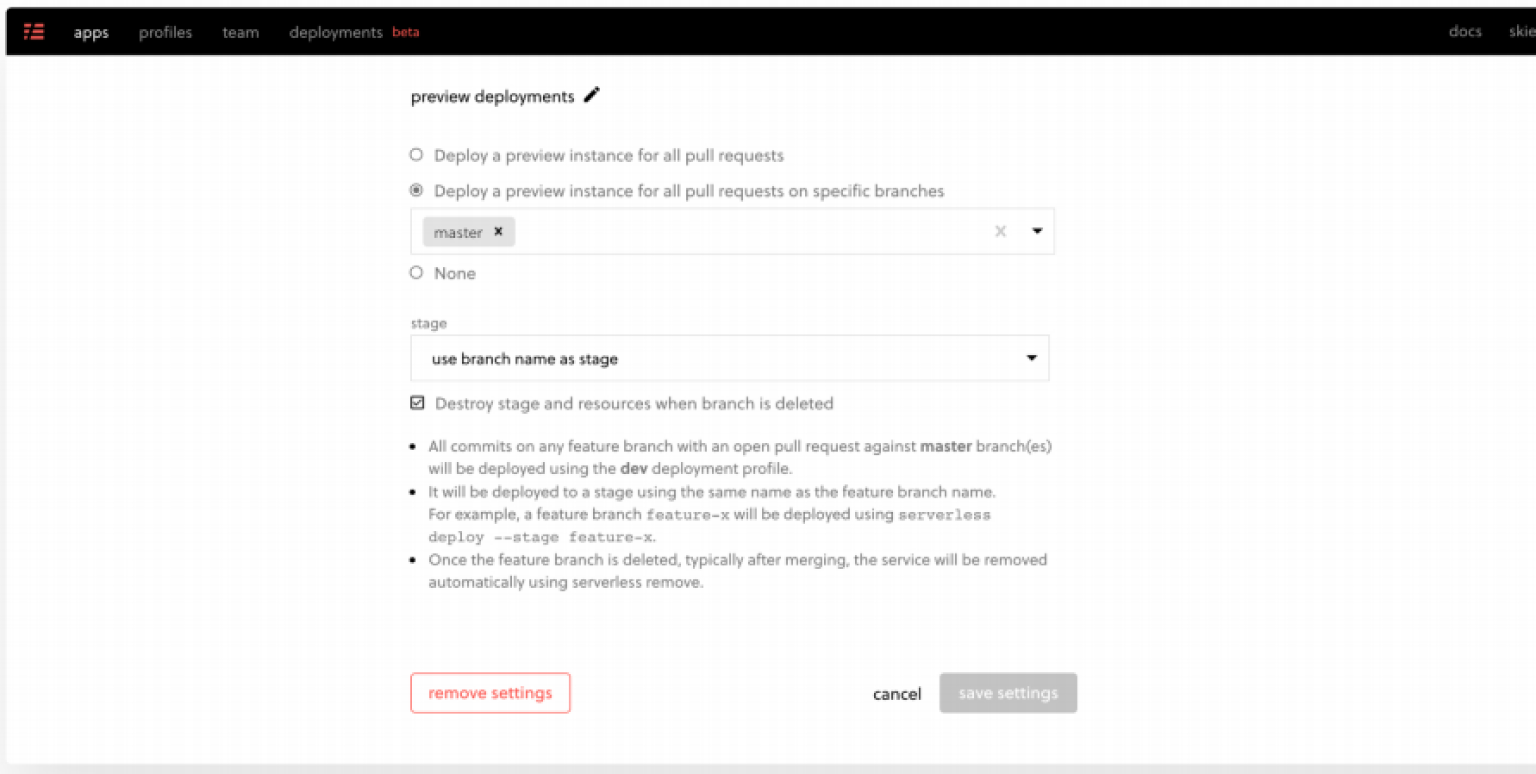 Once this is configured and saved, we'll have an automated review workflow. Each pull request will then run unit tests in Serverless CI/CD and then it will bedeployed. Since we have the use branch name as stage option set, the service will be deployed to a stage using the branch name. For example, a feature branchfeature-X will be deployed using serverless deploy --stage feature-X.

We also have the Destroy stage and resources when branch is deleted option turned on. Once the pull request is reviewed and approved, it'll be merged anddeleted. When the branch is deleted. Serverless CI/CD will automatically destroy the deployment. Self clean up!

Setting up automatic deployments to staging and production is one of the easiest parts of the entire process.

In your application go to the CI/CD Settings tab. For each service add the following configuration to the Branch Deployments section and save your changes.

The entire CI/CD workflow is tied to our activity in Github, this includes the workflow for promoting changes from one stage to the next, and rolling back a change in case of failure.

If everything in staging looks ok and ready to promote to production, we'll use our git workflow to merge the desired commit from master to the prod branch. Since we already configured branch deployments for the prod branch, it will automatically run the tests and deploy to the prod stage.

Just as before, we'll use the git workflow to roll back a change. If you need to roll back a service, this too should be tied to the git flow. The roll back to a previous commit, you should create a new PR that reverts the initial merge commit. This is conveniently handled with the revert button in the Github Desktop app.

To achieve the above requirements, your team must decouple the release process from the deployment process. That is, your team should be able to deploy features often, but not necessarily make them available to your users. This can only be achieved using feature flagging, the practice of deploying to production but controlling the features behavior, like visibility, via a toggle.