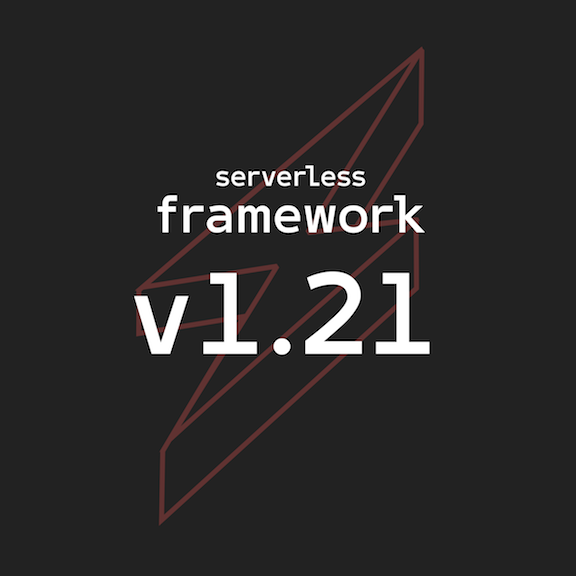 It's been a wild two weeks, everyone.

We not only held Emit, but showed up with a whole new look and logo, too. If you weren't there, rest easy. Videos of Emit talks are on their way, and the speaker slides are already up.

What we're trying to say is: sorry for the temporary lull in new action-packed features for the past couple of releases. But this week, we're back! Please enjoy a really nice feature-set for the Serverless Framework v1.21 release.

We're thrilled to announce that Kubeless provider support has just landed in the Serverless Framework!

Kubeless is a Kubernetes-Native framework developed by Bitnami which makes it possible to provision and run serverless functions atop Kubernetes.

You can create a new kubeless service with the help of the kubeless-nodejs or kubeless-python service templates:

Make sure to read the announcement blog post (which includes a nice showcase video) and check out their plugin repository.

The invoke and invoke local commands make it easy to invoke and test-drive remote or local functions with custom input.

All the input data is automatically parsed as JSON and handed over to the function as it corresponding input data.

Sometimes you want to have more control over the way the input data reaches your functions. This is why a --raw flag was added to invoke and invoke local.

Using this flag makes it possible to pass in the invocation data as is without any automatic transformations.

Here's an example how this --raw option can be used in practice:

It includes information such as e.g. the logGroupName or functionVersion.

With invoke local we've implemented a fixed mock object which contains all the information AWS also passes in your Lambda function when it's invoked on their end. This makes the experience comparable to AWS even if the function is just invoked locally.

While this context object is always passed in as the default it's now possible to specify an own context object with the help of the --context and --contextPath options.

Let's take a look how this context object works in practice:

You could also use a path to a file which describes your context:

Back in an earlier version of Serverless, we added support to set up provider credentials with the help of the Serverless CLI.

This streamlines the onboarding experience and lets you do the account configuration with Serverless rather than having to install and use the providers CLI tool.

For example setting up AWS credentials is as easy as:

Serverless v1.21 introduces an enhancement for this config credentials command. You are now able to update existing profiles through the Serverless CLI.

The --overwrite flag is necessary if you want to update an existing profile. It signals that this is a "dangerous" operation and helps preventing unintended changes:

Large serverless applications are usually compositions of individual serverless services. That's where the info plugin comes in handy as it shows important information about the service the user is currently working on.

Serverless v1.21 has a slight improvement for the info plugin so that the stack name is now displayed as well.

This makes it easier to see and understand which stack information is currently displayed on your terminal.

Creating new services with the templates is as easy as:

In addition to the 1.22 milestone and its Issues and PRs, we still have lots and lots of other Issues and PRs. We'd love to implement and introduce these in some of the upcoming releases.

Great! We've compiled a list with some of the most wished features to make it easier for you to find areas where we could most use a hand.

Deploy many micro/nano services to one API Gateway

We already started a WIP implementation with the following PR, but for now it only provides a partial solution. Do you have any ideas how we can improve the support for this feature?

Unable to create services with a high resource count

Services can grow significantly in size. We've worked on different solutions for this problem (see this PR) but we're still not 100% there yet.

Let resources depend on the ApiGateway::Deployment

The ApiGateway::Deployment resource has a random string in its name so that deployments are re-triggered on AWS end.

This makes it hard to create other CloudFormation resources which dependend on it.

It would be nice to skip resource delpoyments if the corresponding resource already exists (e.g. when using DynamoDB tables). Could you think of a reliable, production ready way that will detect which resources deployments could be skipped?

arns are used everywhere in CloudFormation. However some of our event sources don't support all the different types of intrinsic functions which can be used to reference arns.

It would be great to have a global arn parser which can be re-used throughout the whole codebase. This parser could also be exposed to the framework user e.g. via this.provider.findAllCfReferences(), so that plugin authors can benefit from this functionality as well.

Other issues and PRs

This list is just a gist with some of the most wished features from our community.

We have lots of other issues where you could leave some feedback or jump directly into the implementation.

Philipp Müns is a core developer at Serverless, Inc.