Looking to learn more about what Amazon API Gateway is, the use cases it works best for, and its limitations? We’ve got you covered.

In this guide, we’ll walk you through all the details of API Gateway. We’ll show you how it can be used with the Serverless Framework and give you a list of resources should you want to learn even more.

Recently, AWS also launched AWS HTTP APIs. These are a potential alternative to API Gateway REST APIs that we discuss in detail in our Ultimate Guide to AWS HTTP APIs.

What is Amazon API Gateway?

Amazon API Gateway is a managed service that allows developers to define the HTTP endpoints of a REST API or a WebSocket API and connect those endpoints with the corresponding backend business logic. It also handles authentication, access control, monitoring, and tracing of API requests.

Many Serverless applications use Amazon API Gateway, which conveniently replaces the API servers with a managed serverless solution.

How does API Gateway work?

API Gateway sits between the backend services of your API and your API’s users, handling the HTTP requests to your API endpoints and routing them to the correct backends. It provides a set of tools that help you manage your API definitions and the mappings between endpoints and their respective backend services. It can also generate API references from your definitions and make them available to your users as API documentation.

API Gateway integrates with many other AWS services like AWS Lambda, AWS SNS, AWS IAM, and Cognito Identity Pools. These integrations allow for fully managed authentication and authorization layers, as well as detailed metrics and tracing for API requests. 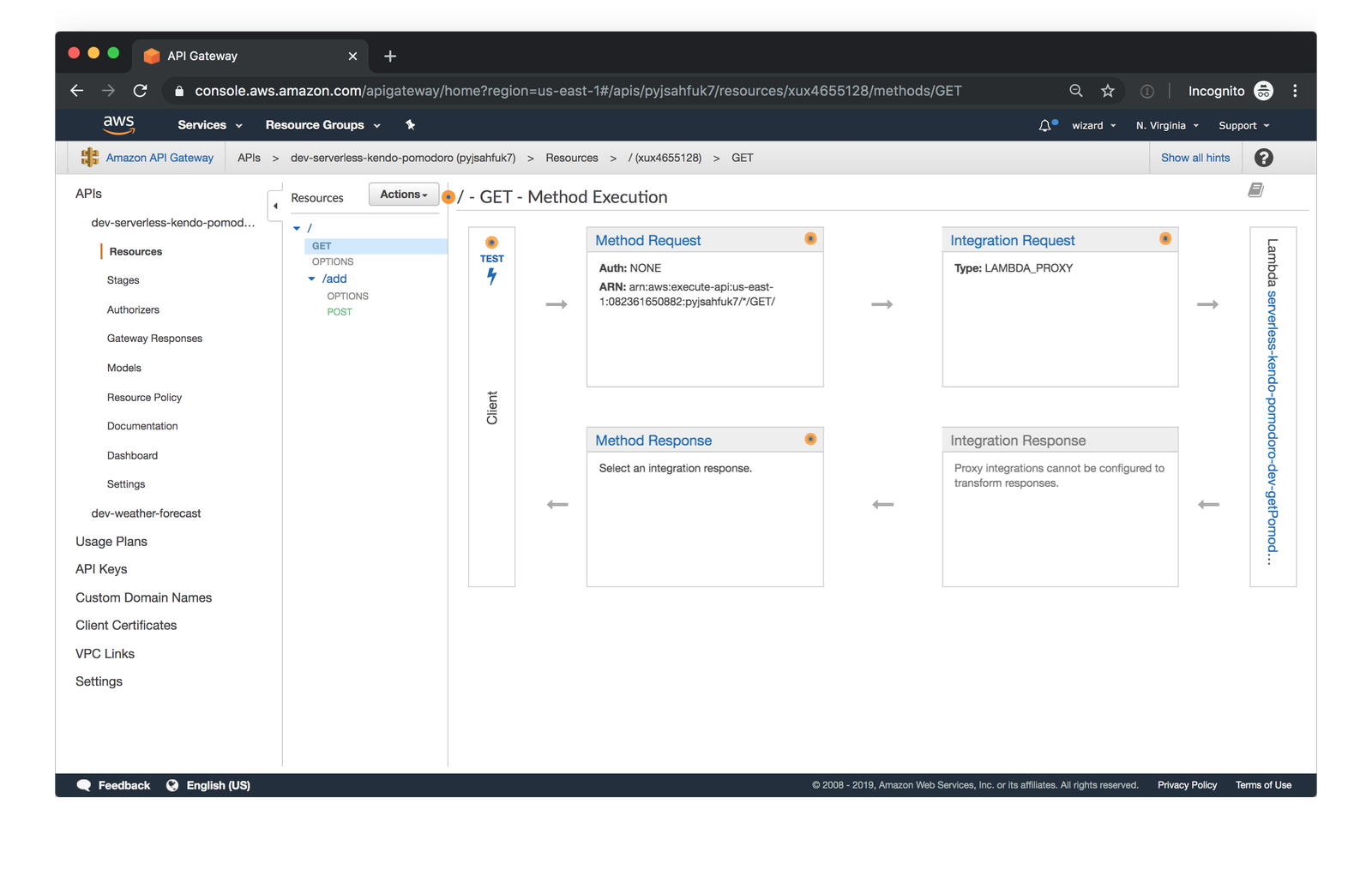 The service’s graphical user interface allows you to sketch out the API structure and view the API flows in graphical form after they’ve been created.

While the user interface is a good way to try out API Gateway, we recommend creating your API structure in code, for example, using the Serverless Framework’s built-in API Gateway event.

Why is API Gateway an essential part of the Serverless ecosystem?

This brings the advantages of the serverless model—scalability, low maintenance, and low cost due to low overhead—to mainstream web applications.

How does API Gateway integrate with other AWS services?

Many AWS services support integration with Amazon API Gateway, including: 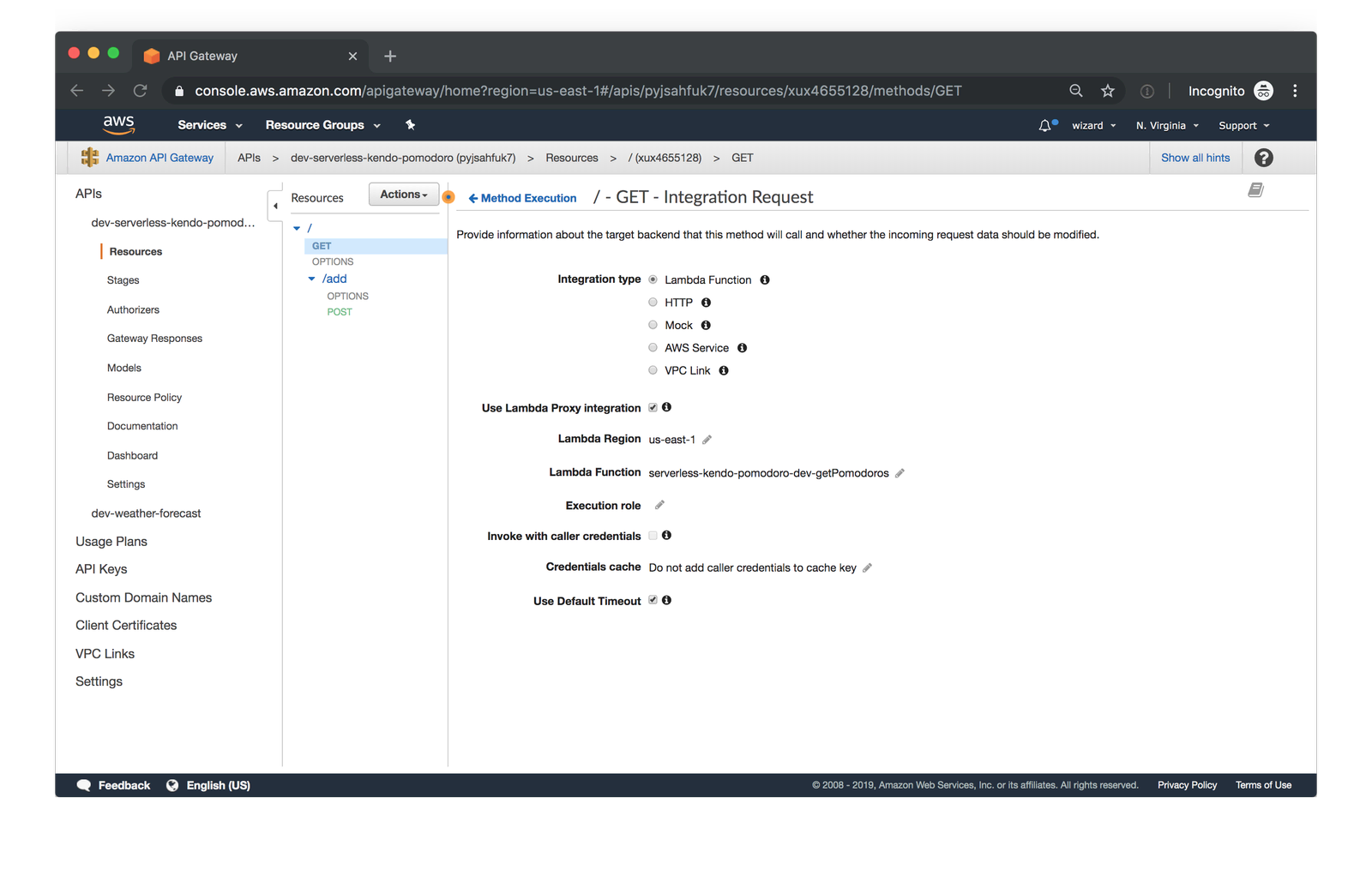 How does API Gateway work with the Serverless Framework?

In this example, the entire payload from the API request will be passed into the handler.hello handler and made available to your Serverless function.

The Serverless framework supports functionality such as using custom authorizers in your serverless.yml file, setting up usage plans for your APIs, validating the request schema, and much more.

Check out the API Gateway event docs for more examples of how to use Amazon API Gateway with the Serverless framework.

Use multiple microservices to serve the same top-level API. API Gateway makes it easy to have different Serverless functions serving different parts of your API. This means you can better encapsulate your functionality into each function and clearly separate the business logic of different parts of your API. Another benefit here is that you can transparently replace the function called by a given API request—the users won’t notice any change on the API layer.

Save time with integrations: authentication, developer portal, CloudTrail, CloudWatch. API Gateway allows you to implement a fully managed authentication and authorization layer by using Amazon Cognito and Lambda custom authorizers without running your own auth systems. By using API Gateway you also get access to the developer portals that are generated automatically from your API schemas. In addition, CloudTrail, CloudWatch and X-RAY all integrate with API Gateway, simplifying the profiling and debugging of API requests.

These benefits boil down to reducing your time to market for new HTTP APIs and increasing developer productivity, while also ensuring that the solutions your teams are building stay scalable.

There are a few caveats when using API Gateway that you should be aware of before using it in production. The main downside is added latency in your APIs: in certain cases, the service can add costly milliseconds to your response times. This issue is exacerbated by the fact that you can’t fine-tune API Gateway—it’s a managed service, and AWS doesn’t allow you to tweak the performance parameters.

That said, the impact on latency won’t be visible unless you are building truly low-latency applications or are combining many API layers. There aren’t many alternatives to API Gateway besides running your own API servers; running your own servers might well be worth it if you’re heading into latency-sensitive territory.

What is API Gateway good for?

The main use case for Amazon API Gateway is in building serverless HTTP APIs. API Gateway stands in as your API server: managing the schema of your HTTP API, connecting each endpoint to the right backend service, and handling the concerns like authentication and throttling.

Amazon API Gateway is probably not the right choice if you’re looking for an ultra-low-latency HTTP request router or if you want a lot of control over how API requests are processed (in these cases, a custom solution may perform better), or if you are building a GraphQL API and would like to manage its schema (check out AWS AppSync for GraphQL APIs).

API Gateway implements several usage limits. Most of these limits can be increased by contacting AWS support, but there are a few limits that can’t be changed:

In each of these cases, it should be quite possible to build your APIs with API Gateway without running into these limits:

After the free tier period, the following pricing applies:

Example cost calculation Let’s assume you have a REST API with 1,000 users, and each user makes 10,000 API requests per month on average. For this level of usage you’ll pay:

Keep in mind that these are just the API Gateway service costs. Of course, you’ll also be charged for the AWS Lambda compute that actually generates your API responses. Check out these example cost calculations for AWS Lambda to see what your AWS Lambda costs might be when providing a backend for an API as in this example.

Getting started with Amazon API Gateway and Serverless Framework

These resources will help you learn more about using API Gateway with the Serverless Framework: